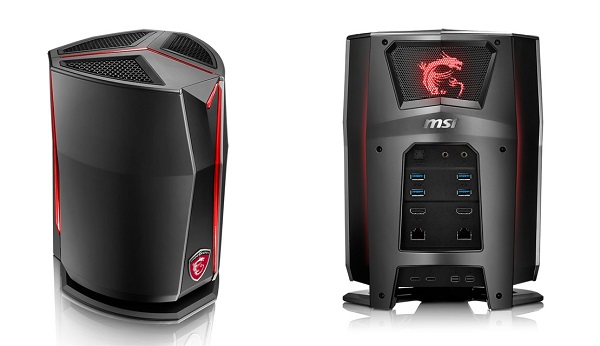 With lots of character in its design but some ways we might well compare with the Mac Pro, compact mini-tower, something cylindrical, the new Vortex Company MSI comes to the market to show that in a small space can put everything necessary for the most demanding players feel overwhelmed with the experience.

Who says games, also speaks of virtual reality, we know how high are necessary to start up with guarantees helmets that are appearing on the market demands. Again, Vortex is relatively small, no larger than 27 centimeters tall and weighs less than four kilos.

Besides its striking design, the computer becomes more interesting when we know there is room for a Core i7 Skylake (6700K) family, up to 32GB of RAM, and two slots for Nvidia graphics cards.

Obviously it is also a very powerful work station, so everyone will want orientation to this small pump in the form of computer.

As you can see in the picture below, the interior design and layout of the components is quite special, reminding the arrangement used by Apple in its Mac Pro…

You can create a workstation in small format; there is even room for two graphics cards in the two configurations that have been created to give life to this Vortex. Both are known as MSI G65 Vortex , but differ by last name or SLI SLI-011-002, the latter as more powerful option.

Both have the same processor Z710 on a plate, a pair of 128GB SSDs (M.2), and a disk 1TB 7200rpm. The main difference is in the graphics – are not versions for laptops – and amount of memory available:

For do connectivity goes, we see a couple of Thunderbolt 3 port, two HDMI – are 1.4 – mini DisplayPort other two outputs, four USB 3.0 ports.

The Vortex is small but you pay dearly. The cheapest configuration serves MSI goes for $2200. We can climb the top step if we have $4000. We grow in possibilities with respect to another of the stars of the 2016 GDC, the small Skull Canyon, but we find ourselves at the price of Mac Pro.

The G65 features MSI Vortex application Dragon Center, allows us to change the lights of the computer case, monitor its performance and adjust parameters according to our needs.