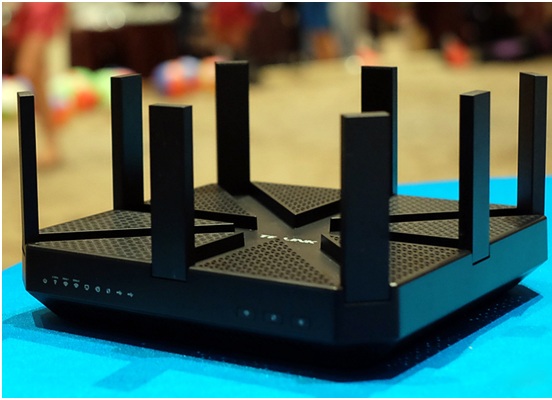 In Las Vegas, the annual Consumer Electronics Show – CES 2016, according to tradition Consumer Electronics Show opens announcements bright year and attracts thousands of people from around the world. Special attention it deserves in the stands of manufacturers of network devices. That’s where you can find something fundamentally new. This year the company TP-Link has introduced a wireless router Talon AD7200. This is the first model with the support of the new standard – IEEE 802.11ad (WiGig), the development of which took nearly seven years.

The router is built on the QCA9500 chip manufactured by Qualcomm Atheros, before the forced transition to another speed standard – 802.11ac. The main purpose of WiGig is to provide the fastest connection in the same room. Theoretically, at a distance of up to ten meters line of sight allows for WiGig rate 6.77 Gbit / s (it is often rounded up to 7 Gbit / s).

To achieve such impressive speeds you want to use eight antennas and technology adjustment pattern on the array beamforming. The router literally bristles with foldable antennas with high gain. However, apart from the standard speed limits impose hardware characteristics of the particular router. At Talon AD7200 speed limit mode 802.11ad stated at 4.6 Gbit / s.

Simultaneous multiple wireless service customers it is carried out at the expense of technology Multi-user MIMO and separation of frequency bands. TP-Link Talon AD7200 operates in the 2.4 / 5/60 GHz. Therefore, it can be used under severe noisy, unlike other high-speed routers. As WiGig files can be transferred to ten times faster, while the other wireless clients use a different standard. For example, ninety-minute film in 4K resolution can be copied in less than five minutes. The aggregate data rate is declared to 7.2 Gbit / s.

The standard WiGig increase per meter of distance leads to severe loss of signal power from the high frequency transmitter – 60 GHz. She does not give a signal to overcome even those obstacles are no problem “breaks through” a regular Wi-Fi in the 2.4 GHz band. Therefore 802.11ad is ideal for fast communication over short distances – such as video (above) to a neighboring high-definition device. It is easier and more convenient, but more expensive than using a cable. For other tasks need to use the old standard Wi-Fi. Therefore Talon AD7200 supports them all, including 802.11ac and more common a / b / g / n.

To connect external drives and network printers on the router provides USB 3.0 ports and USB 2.0.Wired connections are possible using the four Gigabit ports. Perhaps the first gigabit Ethernet, in practice, will be slower wireless communication.

Home sales Talon AD7200 is scheduled for the second half of 2016. In addition to the TP-Link devices with 802.11ad this year plans to introduce Acer, Asus, Elecom, Letv, NEC and SiBEAM.