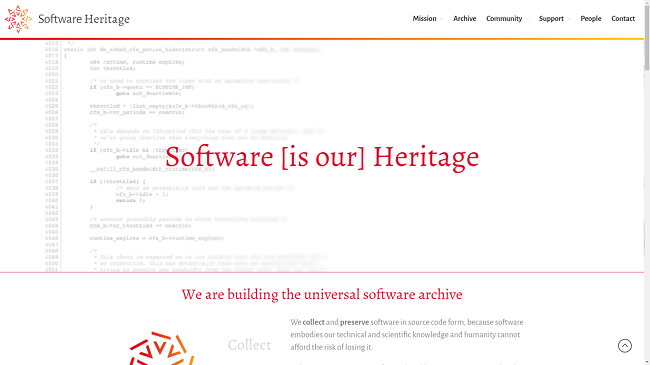 Heritage Software is an ambitious project from France and worldwide, is trying to archive all open source software world. This goes far beyond saving copies of some of the most popular applications, and today the archive has 3,000 million files belonging to more than 49 million projects.

To get such a number, Professor Roberto Di Cosmo and his team have been collecting from anonymous projects that appear on portals like GitHub to the most popular open applications on the network for three years. As Di Cost has explained to Teknautas, the aim of the initiative is to create a collection of all available code for that follow can access it long term.

True knowledge is the source and no code into the executable, with that maxim in mind and in fear of losing this knowledge they created an international consortium in which volunteers, research centers and universities are spent a year creating the infrastructure to Make the portal public last summer.

The goal: that anyone has access to the repository

The ultimate goal of this ambitious project is that anyone can access the largest repository of open source projects source code in the world. Not only for research and analysis, but for anyone to look for vulnerabilities or create even better applications based on existing ones.

The software dominates our world. We communicate with ours thanks to him, he helps us to pay the bills, to enter the entertainment and to buy all type of contents online. It also keeps our economy running and is the basis of any electronic device. That is why, in the opinion of this project, it is important to keep everything so that it is not lost.

In addition to storing the code, the page is also creating chips with the history of development of each project to become something like the great Wikipedia software . At the moment they have started creating a copy of all GitHub, and repositories like Debian or Google Code, as well as those contributed by companies like Microsoft France.

With these three starting points make sure they have covered most of the open source software that is used today, from the GNU / Linux distros to applications like Firefox or LibreOffice, through the source code of the Apollo XI himself.

For now, the of Software Heritage remains an ongoing project, and users can not access it massively and unburden the code stored, but the idea is that we can do in the medium and long term. Even so, if we know the SHA identifier of a project we can look for it to access it. But before they will have to get the most difficult for any project of these characteristics: the funding and sufficient support to be able to follow.

For that reason, those responsible encourage anyone to join their mailing list and their IRC channel to subscribe and collaborate. They also have a program of sponsors for all these institutions and companies who want to help can. The money will be used to strengthen infrastructure and finance their derivatives costs to keep growing, since it is a non-profit project: just want to preserve our heritage software.