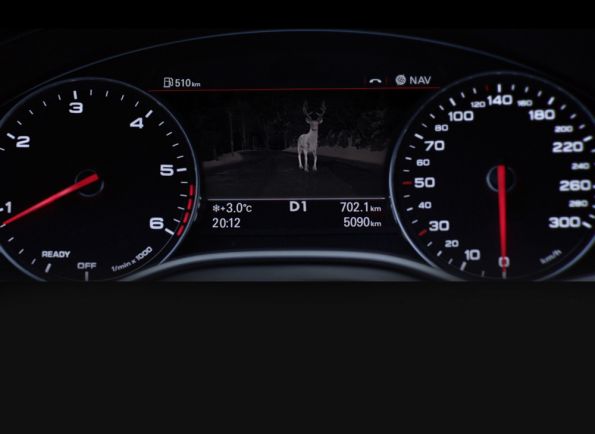 How far is able to reach the vision of the human eye ? Are we really able to perceive that which is beyond our reality? The futuristic and innovative technology the new Audi Night Vision Assistant shows that in the world there are more than we can see with the naked eye, not do we think?

The darkness hovering over the city and the haze of the night, on the eve of Christmas, appropriates roads, wrapping by a thick blanket of cold and mystery. At the foot of a mountain, in the same corner where he created man in the form of road and nature in the form of a thick forest shake hands, it is where an event takes place most unusual.

A father prepares to celebrate Christmas with their families. To undertake road driving her new Audi with his son. What will be his surprise when the new security system Audi Night Vision Assistant detects a reindeer in the middle of the road, an animal that was not supposed to be in that place and that the driver much looking carefully is not able to see with their own eyes . To ensure that an animal has stopped in front of his vehicle is stopped in the middle of the road and goes in search of the mystery . The surprise for the viewer and the child found himself in the back seat of the vehicle will be higher when the system Audi Night Vision Assistant,  plus a reindeer, listen to another entity well known to all: Santa Claus.

With this history, Audi presents his new film “What Christmas hides”, through which wants to congratulate these upcoming holidays and remind us that all those things that basically we continue to believe, despite the band all we have set when we reached our adulthood, they are all around us. As advanced means as new technology Audi Night Vision Assistant will allow us to detect people or animals in the middle of the dark night and a not inconsiderable 300 meters away.

This film, which will be shown from next December 25 in theaters in Barcelona and Madrid before the expected release of Night at the Museum 3 can contemplate via Youtube, Facebook or Twitter with the hashtag.

The mystery and magic take over the new initiative of Audi with coming to wish the best to all of us for next year. Do not forget that this world is far more mysterious than you think.