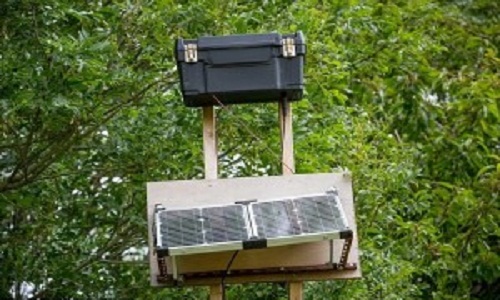 One of the disadvantages of living in rural areas is the quality of the connection. Long I lived for a while on a farm in the middle of nowhere and although the internet was not good, had more on my mobile phone network. In this same situation you have been an English farmer named Richard Guy.

Richard had a very bad internet: 1 megabit per second. A very poor amount that barely allowed him to do anything. In England, the average speed is 25Mbps, tired of fighting with your call and connection provider noticed something very interesting: his mobile had better coverage and speed with 4G. There, he found the solution to their problem.

Where the cable fails, the other 4G

Richard, a technology enthusiast without many resources, set out to solve the problem of connection at home. Using a few basic elements built a wooden tower that allowed receive their 4G data and dump them into a fiber optic cable to bring high-speed connection to your home.

At the top of the plant we found a 12-volt battery stored in a tool box waterproof. In it, the energy that capture two solar panels on the bottom is stored. A wooden structure is responsible for holding all elements.

Under the plates have a receiver 4G fed with battery power from the top. Finally, the device captures this signal is sent home through a fiber optic cable (may sound expensive but worth a meter of fiber more than a euro). The cable coming into the home, is the one responsible for providing connection to the home.

The leap in quality has been great for Richard who has gone from having a poor megabit per second to 69 mbps have a much more reasonable connection. Far more than the average as we saw above.

What it began as an experiment to solve a specific need has finished evolving into a business model. With the name of Agri Broadband , Richard has created a company that is responsible for advising on sites with poor connectivity in the field to study what are the best options to improve the internet.

Depending on the equipment being installed, a fee is charged but in no case the company intends to be a telemarketer in covered but a technological advice to solve very specific problems.