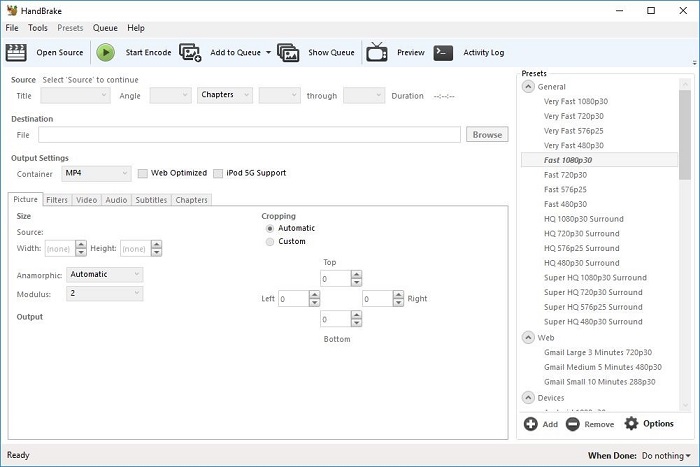 Freed Brooks, the author of The Mythical Man-Month on software project management, coined a very curious phrase: How is it that a software project gets delayed a year? Day by day. And he does not lack reason. There are programs that stay in the so-called development hell a lot of time. For example, The Last Guardian.

This could well be the case of Handbrake, which 13 years after it began its development finally sees its version 1.0 released as they have said on its official website pplication was being updated little by little.

For those who do not know it, Handbrake is a Free Software project that started as a DVD to video file converter. Now you can also convert video from almost any format, and can convert any DVD or Blu-Ray disc (which does not have copy protection) to mp4 or mkv formats.

The program is very easy to use and offers advanced options to users who want more control of the conversion process. At best, all you have to do is choose one or several video files and choose one of the output presets it offers. The next thing is to start the conversion itself.

Among its features we can highlight the extensive collection of presets just mentioned, an extensive list of codecs with which to operate and a large section of manual customization of the output file for a much more fine-tuned control.

It is worth mentioning that it is a fully multiplatform program, which can be installed on Linux, OS X and Windows.

Handbrake 1.0 is a great update that brings a good number of changes. Talking about all of them would take a lot of time, so let’s try to focus on the most important features of this tool.

First we have the arrival of the support for the codecIntel QuickSync H.265 / HEVC, that works in the processors SkyLake and later. Also with the new version there will be finally support for 4K videos and new functions to make video for multiple devices.

Windows users have been the most specific improvements they have received. To begin with, the size of the installer has been significantly reduced, the ability to pause and resume conversion processes has been added and the DVXA codec has been removed.

For now Handbrake is still not compatible with APIs such as NVENC and AMDAPP, which significantly improve the pace of conversions as they get the most out of graphics cards. Nevertheless, Handbrake is still an excellent free tool that is worth trying.