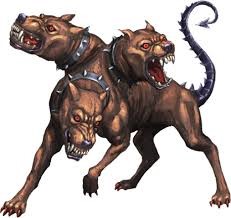 You might remember the three headed dog “Fluffy” in the first instalment of the Harry Potter series the Philosophers Stone. The author J K Rowling based the creature on Cerberus the three headed dog that guarded the entrance to the underworld for Hades. Its not as if he got out much. As Hades wasn’t allowed to leave the chances for walkies was very limited and the dead souls where in longer corporeal. Cerberus had a troubled upbringing but then when your Mum is a half woman half snake creature and your Dad is a Giant serpent (no I don’t know how a Dog came out of that union either) that’s pretty much to be expected. Let’s look at the issues that Hades would have had with the playful Cerberus. 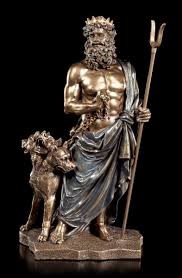 First of all, his cost is tripled. Cerberus’s three heads would need three of everything as the ensuing melee of heads and slobber if you only threw one ball doesn’t really bear thinking about. You’d have to make sure that you either told the dog which heads turn it was to pick up and fetch the ball but that’s on the basis that the dog would get understand it. Maybe one head would but the others might not. The only alternative would be to throw 3 balls, but you would still need to make sure that when you did throw them they would have to be in the same direction otherwise three heads trying to go different way on one Dog body could be messy. Another note humans only have two arms and Hades was the same.

At least when it comes to Dog Collars and Leads there is plenty of choice and price at iwoof.com Hades would not be stuck in that department. He’d still need to get at least 3 bowls and triple the amount of dog food. Surely though only one head needs to eat. If you fed all three heads the Dog would become enormous (which he was reputed to be anyway) but in a fat way. There fore Hades would have no choice but to go up top and take him for a walk. This is also problematic because when he did get him up to the local park its certainly going to draw attention and comments possibly screams of terror to but then you’d imagine that Hades and Cerberus would be happy with that.

The final and most horrifying thought is what if Cerberus wants to use the facilities so to speak. This more than likely that Hades would need to bring some extra strength bin liners rather than just a few doggy bags. Glad I’m not a Greek myth. That’s not a job I’d want anytime soon.