I first saw Star Wars at the tend age of 5. It was my birthday. There were only 2 spaceships from that film I wanted for that film a Star Destroyer or the Millennium Falcon. It was the pinnacle of cool because it didn’t look cool. It was a home and base. It was “junk” because that’s what it wanted you to think. It was like its owners Han, Chewbacca and Lando before them, it was a trickster, a scoundrel, it could fool you and you would be worse off for underestimating it. It was a simple deliver vehicle. Now whilst the Millennium Falcon could deliver pretty much anything across the Galaxy it is not going to be making an earth bound trip anytime soon as if you are looking for Van hire Gloucester you would be better off taking a look at https://www.fleetwayrentals.co.uk/ 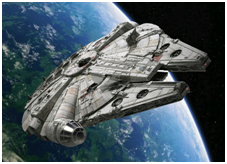 A white van. The Ford Transit of Space that’s all the Falcon is. But underneath that exterior lies the heart of a speeding beast. Ever noticed how there are no other ships in the Star Wars like it? Watch the prequel films, Phantom Menace etc and you see the evolution and forerunners of most of the ships and vehicles. Darth Maul has  a Tie fighter (it even whines like one) Obi Wan fly’s an A-Wing, the Republics equipment is all early versions of AT-AT’s and Star Destroyers. There is no Falcon predecessor, its totally unique. In the latest films you’ll see crashed Imperial equipment, but the Millennium Falcon? Still working, still saving people from the jaws of defeat. See how it rides to the rescue and gets the last remnants of Rebels out of a tight spot. It does it again in Last Jedi. The ol’ reliable, probably still make the Kessel Run in less than 12 parsecs.

Like the Tardis in Dr Who and the USS Enterprise in Star Trek (from A to E), it has become a character in its own right. Show it’s picture and people can pick out the film straight away. But I’m starting to get a little worried. I’ve seen things on the Internet that are making me nervous. There is a new prequel film coming out about the young Han and how he gets the Falcon. It’s clean and the seats are yellow, there are no special modifications yet and the front mandibles are filled it. What have they done to it? Turns out it’s flashy because it’s a Lando’s and he is a gambler, so he needs it smooth to show off. Han soon knocks chunks of it then and makes it the sneak it is. I prefer the old one, the Han modified one. It feels right and proper and even comfortable. As Han says “Chewie, we’re home”.