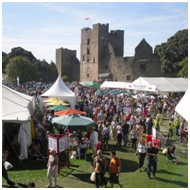 One of the best Food festivals on the calendar is the Ludlow Food Festival. Set in the picturesque town of Ludlow a within its castle grounds you are in for a culinary treat should you decide to visit. Caterers Shropshire finest no less will gather and the appearance of http://www.freshandlush.co.uk/ will be widely anticipated. How did this great festival come about?

Now in its 24th year Ludlow food festival in Shropshire is a wonderful opportunity for producers to come together in a beautiful setting to taste, create and celebrate all tat is best in food. Whilst the UK is more than adequately represented all foods tastes and flavours from around the world can be sampled.

One of the most striking things about the festival is, of course, the location. There are not many that are set in a castle! Ludlow castles outer bailey provides a fantastic setting and just adds that little something different. Although the tents and Marquees are there, as you would expect the surroundings of the castle cast a dramatic spin on the event. What cab you expect to see?

First off there is a multitude of exhibitors. It’s no surprise that Ludlow has a food festival as it has, for many years, had the pioneering Ludlow Food Centre just outside the town on the A49. The centre has always been a standard of excellence and its ethos of having an open window on the food prep area so that you can see how your food is made was trailblazing and has been imitated many times. There stance on trying to source local Shropshire food above anything else is also very laudable.

So, who can you except to see at the Food festival? Well, as you would expect there will be a few famous faces in the culinary would dropping into provide help and advice for when you try and create your own masterpieces in your own kitchen. Last year several stars from the Great British Bake off were on hand to help and judge in a bake-off competition and there were restaurateurs from such prestigious eateries as Heston Blumenthal’s Fat Duck and the much vaunted Tredwells.

One of the best additions is the Live Fire event which is situated in the actual old kitchen area of the Castle itself. This link with heritage certainly made a big impression on the visitors and the fire stage was the centre of some brilliant Barbeque and stylish grilling the likes of which had not been seen before. It’s a fantastic food festival and if you can make it it’s certainly worth it.