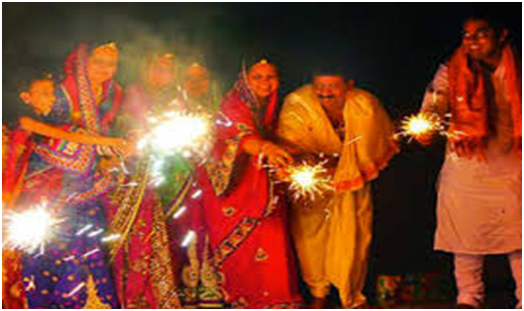 One of the biggest events on the calendar in Leicester is the festival of Diwali. The celebrations are among the largest outside India and this year Leicester attracted nearly 40,000 visitors to see the switch on of the lights on Belgrave Road. Diwali is an integral part of Leicester culture and celebrates the Hindu religion. Named the festival of light, it celebrates good over evil, truth over lies and of enlightenment.

The festival is two weeks long and begins with the switch on of the lights on Leicester’s Golden Mile. There is Bollywood dancing, fireworks, food and above all community spirit. The festival this year featured more than half a mile of garlands and 6,500 lights. There was also a Fire Garden and a huge ferris wheel.

It is said that more gold is sold on the Golden Mile than anywhere else in Europe and here you can also find shops selling saris, spices and bangles and a short distance away is a statue of Gandhi. This area of Leicester is really a ‘Little India’ and could be called a city of multicultural beauty.

Before Diwali night, families clean and decorate their homes and offices and on the night will dress up in new clothes and light diyas, which are lights or candles. Prayers will be made to the goddess Lakshmi, the goddess of fertility and prosperity. Afterwards there will be fireworks and feasts including sweets called mithai. Families might exchange gifts and so Diwali marks a major shopping time in countries where it is celebrated. In that respect, it is a lot like Christmas. Diwali celebrates a new beginning and a time to be positive. If you run a business then why not give your website a new beginning and think about Web design Leicester. For more information visit, http://acethespace.co.uk/

With a greater understanding of Indian culture, Diwali is becoming more celebrated in other countries outside India. Indeed, as it is in Leicester, the celebrations are becoming a part of local culture. It’s not surprising with food as good as Indian sweetmeats being on offer. Diwali snacks also include tasty morsels made from chickpeas, rice, lentils, spices and coconut and are deep fried. Bombay mix or chivda is abundant as is the sweet, deep fried discs called chirote.Another dish that sounds amazing is called sheera and consists of sweet, fudge-like semolina mixed with raisins, cashews, cardamom and saffron.