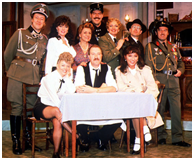 With a host of catchphrases like the one in the title the sit com sensation Allo Allo was bound to be a hit. It was the creation of Lloyd and Perry who had been the talent on many of the BBC’s success such as Hi De Hi, It ain’t half hot Mum and the much-loved Dads Army. This time their attention turned towards occupied France. Allo Allo was based in part on the very serious and tense drama Secret Army which followed the fortunes of a resistance cell. That didn’t end so happily, the restaurateur that Rene is based was hung as a collaborator at the end of Secret Army when in fact he had been working for the resistance throughout. Just letting Germans into you Café appears to be enough back then. The show is set in a quiet little provincial French town that seems to be only populated by wartime stereotypes, and therein lies the joke. This stereotypical view of small villages in France had viewers laughing for many years. There now appears to be a surge in the number of people actually wanting to move and retire across the pond and property for sale in France has become of great interest to people in the United Kingdom. If you are one of these people take a look at http://www.frenchpropertysearch.com/

The action centres around Café Rene and its owner Rene. He just wishes for a quiet life. He has no issue with the Germans and Italians and merely sees them as more customers to serve and make money from. When the English and Americans come he’ll be exactly the same. Around him his fellow country men feel very different. They are determined to see the end of the Germans and will do everything to work against them but be nice to their faces.

Every Stereotype is covered. Rene is an amorous over sexed manic who sleeps with all his waitress, Michelle form the resistance and even Helga the Blitzmadel admin assistant to the German Colonel and girlfriend of the limping Gestapo officer Herr Flick. Everyone except his wife Edith that is. Edith thinks she is Edith Piaf but the customer thinks otherwise. When she sings they all order cheese and bread to stick in their ears. One time the Feldwebel Gruber complains that his put Swiss cheese in and the holes have let her voice through.

The German officers all fit into the stereotype. The bombastic overweight General who would rather avoid all of this and go home. Captian Geering his second in command is the high pitched slightly panicked one, Gruber is the gay one and Flick is the menacing cold “vun”. It takes the mickey of the British too. The escaped English airmen are all “Helllo” and “I say old chaps”, special mention though must go to Special agent Crabtree who think he can speak French but is useless. “Good moaning, I was just pessing by thee doar”. It’s very funny.