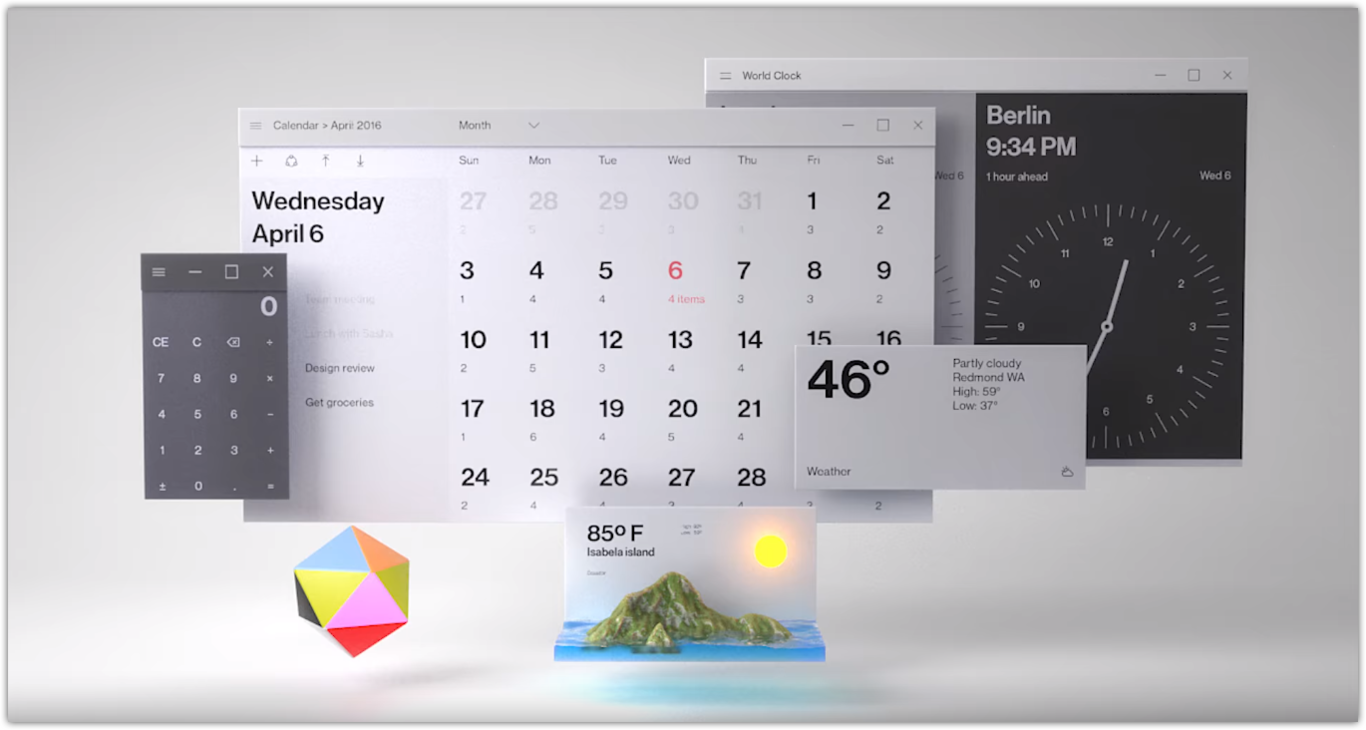 During the second day of the Microsoft Build 2017 Redmond spent time talking about developments in Windows 10. We know that the next big update will be called Fall Creators Update and will arrive in, obviously, fall. And the other thing that is obvious behind that name is that it will also focus on creativity.

It makes sense that while Microsoft tries to promote a Windows more focused on creative tasks and some of its products as the Surface Studio are designed directly for minds that design, that the same operating system suffer a facelift and become more serious with the appearance of interface.

And that’s how Project Neon was born , now officially called Fluent Design, an effort that paints much more interesting and complete of what little has been seen in some applications of the versions for Insiders. And we like it, we like it a lot.

When most people talk about Neon, sorry, Fluent Desing, the first thing they see are the transparencies, and the second is to talk about how it reminds them of those Windows Vista aero effects. Although it is perhaps inevitable, the truth is that there is not much point of comparison. Vista’s aero was a third division team, Fluent is going for the Champions League final.

If you have used many versions of Windows over the years, you have hardly thought that it is the most beautiful system in the world. For a long time Microsoft has fought a battle between maintaining the familiarity of its interface and trying to do something new that looks more modern.

Unlike the Modern design, Fluent will not feel like a drastic change, but rather as a more fluid transition.

Although some of us are tired of the yellow folders in the browser, they are simply ultra recognizable elements that if changed too much can create an ischemic event in the brain of many users. Recall what happened the last time drastic changes were made , such as removing the start menu in Windows 8. Very few happy people.

I speak of this because it is important. Unlike Metro, which later became Modern, Fluent will not feel like a drastic change, but rather a smoother transition (excellent choice of name). We have had years to get used to the flat design, the tiles, and the simplification .

Fluent is like a Modern coming out of the chaos and disorder of adolescence. Although with Windows 10 it improved a lot with respect to what Windows 8 / 8.1 offered, when you see a menu or a Modern app, you feel a bit rough. Its lines do not seem to flow, the elements do not seem to fit at all, something is missing. When you see Fluent catches, it is as if someone had passed a sandpaper and a layer of varnish on the wood.

Another thing that we always see in the screenshots is the absence of icons on the desktop and icons in the notification area. You see a clean and consistent desk. In the only space where there are icons is in the task bar, monochromatic, simple and even elegant. Although, they are still not entirely consistent: not for nothing have there been almost 3000 icon changes among all Windows 10 builds to date.

The changes are also focused on productivity not only in aesthetics, a good design helps the user to take better advantage of the benefits of the system and applications.

The menus in the Modern apps have always been half disastrous, with the Creators Update a step forward, both in the way of sharing things, and in the integration of the Control Panel within the Configuration menu, but still missing. Unfortunately, if something is certain, Fluent will not solve everything the first time.

And this is where we enter what we do not like. Windows continues and will continue to have two interfaces that do not look at all like living together. The file browser aspect has nothing to do with the rest of the apps. The Win32 applications seem to live in another parallel system, and there is still the Control Panel.

With what it has cost Microsoft to promote its app store and developers to program for it, they can barely take pride in 1,000 converted apps. So, it’s not crazy to think that it will take a lot for these developers to integrate Fluent Desing into their projects.

As beautiful and promising as Fluent is, the days of a Windows with a completely unified design seem to be far away . And that in the end subtracts from the great effort made by design at Microsoft.