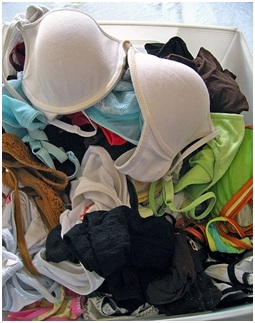 If you have a penchant for exquisite lingerie, you might sometimes wonder what women used to do before the days of Anne Summers, Agent Provocateur and similar brands. A recent archaeological discovery of medieval lingerie (yes, you read that correctly) has finally given us some insight.

The discovery was made in Austria during some reconstruction work being done on Lengberg Castle in East Tyrol, a structure that dates back to at least the 12th century. Workers discovered a vault that housed a variety of “organic waste”. This included textiles, shoes and worked wood. Four pieces of linen were found that resemble modern day bras to some extent, with clearly delineated cups.

Two of the bras are rather more like shirts with cups, but the third of the fragments has two shoulder straps and a back strap, with the shoulder straps having been decorated with needle-lace. Finally, the fourth of these medieval bras consists of two bits of linen for the cups and narrow shoulder straps. The dates of two of these items of medieval lingerie have been confirmed as somewhere between the end of the 14th century and the second part of the 15th century.

Linen underpants were also discovered in the castle and were designed in a rather hourglass shape with some narrow straps at the corners of the garment. Unfortunately, there seems to be uncertainty about whether the underpants belonged to a man or a woman because very little is known about the undergarments worn by women in the medieval period. The wearing of drawers by women was frowned upon in places like Italy even into the 16th century!

To learn more about medieval lingerie and other medieval fashions, check out sites such as http://www.historyextra.com/lingerie and http://rosaliegilbert.com/underwear.html.

One gorgeous modern bra you can opt for is the Prima Donna Deauville bra. To find out more about the bra, have a look at Prima Donna Deauville Bra ranges through orchid lingerie or check out the other underwear on offer on the site. You’re sure to find something sexy and comfortable to add to your lingerie drawer.

What’s more, just a brief glimpse at some of the gorgeous bras available is sure to make you glad you are not a medieval woman!