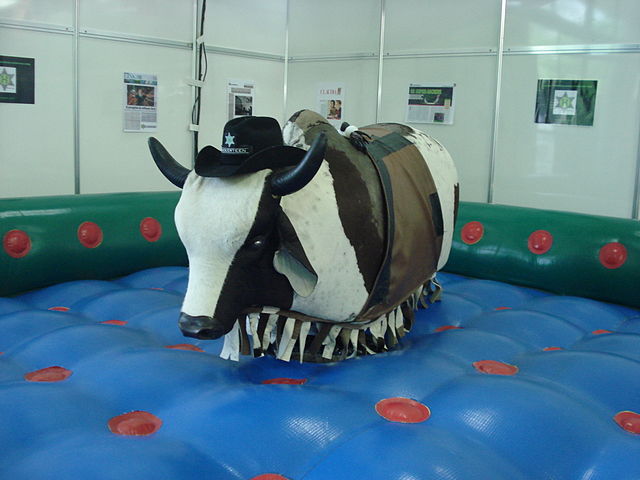 Bull riding refers to rodeo types of sport that involve a rider mounting a large bull and attempting to stay on whilst the animal tries to buck the rider off. Rodeo meanwhile refers to a competitive sport that arose from the working practices of herding cattle in Spain, Mexico, and later the US, South America, Canada, Australia and New Zealand. In American tradition the rider must stay mounted on the bull for eight seconds to be successful, holding on to the bull with one hand and with a long braided rope. A rodeo bull ride manufacturer can bring this age-old tradition to life with a simulated version of the real thing.

Aside from the simulated version, whose popularity in nightclubs, holiday resorts and the like remains unchanged, there are thousands of live rodeos held worldwide each year. Outside the US, the tradition of bull riding takes place with varying rules and histories in Canada, Mexico, Guatemala, El Salvador, Honduras, Costa Rica, Nicaragua, Panama, Brazil, Argentina, New Zealand and Australia. Most, however, do now follow similar rules thanks to the Professional Bull Riders organisation, an international professional instition based in Pueblo, Colorado in the US, with more than 1200 cowboys holding memberships.

The taming of bulls holds ancient roots in contests that date as far back as Minoan culture. The riding of bulls itself has more direct roots in Mexican contests of charreada, a collective term for equestrian and ranching skills. During the 16th century, something called jaripeo developed, a hacienda contest. Originally considered a variety of bull fighting, whereby riders rode a bull quite literally to death, the competition evolved from there into a form where the bull was ridden until it stopped bucking. By the mid-19th century, charreada competition has gained popularity on cattle ranches in Texas and California, where Hispanic and Anglo ranch hands often worked together.

GS Rodeo Bulls helps bring this traditional sport to places where it has not reached and helps make this tradition real for those who would not have otherwise experienced it.

Still popular on the entertainment scene, simulated rodeo bulls are a great source of amusement for not only those who ride them, but also the audiences that seem to quickly amass around these machines. Available with safety mats, electric fans and even CCTV, rodeo bulls are safe for all.